The Trieste of Italo Svevo

Italo Svevo was born Aron Hector Schmitz (but known as Ettore at home) on 19 December 1861 in Trieste from a Jewish middle-class family. After attending the Segnitz boarding school in Bavaria and the “Pasquale Revoltella” Vocational Institute for Trade in Trieste, he started to work at the Trieste branch of the Austrian Union Bank.

Svevo’s passion for literature inspired his extensive production of fiction and theater plays and he was actively involved in the local art circles and newspapers together with his old-time friend Umberto Veruda (1868- 1904), a successful portraitist influenced by German impressionism.
In 1896 he married his cousin Livia Veneziani, an event that would significantly change his personal as well as his professional life. Svevo joined his in-laws in the family business, a paint manufacture specialized in coatings that prevented the proliferation of algae and mollusks on ship hulls and he was among the very few to know the product’s formula. He moved in with his in-laws in the family mansion, near the paint shop in Passeggio
Sant’Andrea. The villa, where he lived for the rest of his life, was later destroyed in the bombings of 1945.

Most of his energies were devoted to his job as the family business expanded and new branches opened (on the island of Murano near Venice and in London). His narrative production was discontinuous and clandestine, making the object of good-natured criticism from his family. Svevo’s first two novels – Una vita (A Life), 1892, and Senilità (As a man grows older), 1898 – were selfpublished with the Trieste-based printer-bookseller Vram, but they were unsuccessful and largely ignored even in his hometown. Since his frequent travels to England required him to learn good English, Svevo studied with the brilliant Irish writer James Joyce, who in the early 1900s taught English to the local middle-class.

Joyce’s influence on Svevo triggered what Svevo defined «the Resurrection of Lazarus», restoring his faith in his literary skills and encouraging a different view of his work. La coscienza di Zeno (Zeno’s Conscience), 1923, Svevo’s masterpiece, owes much to James Joyce as well as other aspects of Svevo’s life that reflected in his work, most notably Sigmund Freud’s psychoanalytic theory.
Svevo died on 13 September 1928 of the consequences of a car accident. In the last years of his life critics finally recognized his talent (the Italianists Cremieux and Larbaud in France, Montale and later Debenedetti in Italy) and his work became widely appreciated. In March 1928 Svevo was celebrated at the Pen Club in Paris by a group of fifty of the very best writers and intellectuals in Europe, including James Joyce, Giuseppe Prezzolini, Jules Romain, Ivan Goll and Giovanni Comisso.

Ettore Schmitz rests in the tomb of the Veneziani family in the catholic cemetery of Trieste, while his own family tomb is located in the Jewish cemetery, because Svevo had abjured Judaism to embrace the Catholic faith after his wedding to Livia. 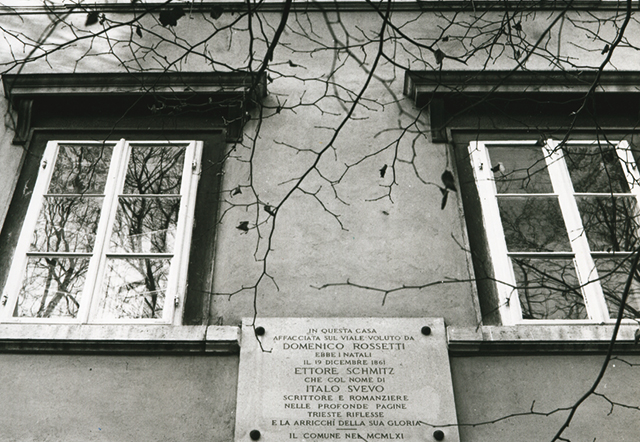 Aron Hector Schmitz was born in this house on 19 December 1861, the son of Francesco and Allegra Moravia. He lived here until 1881. This district and its streets provided a stage for many of his literary characters.

One evening at the beginning of January, Balli, in the worst of humours, was walking alone along the Aqueduct.
– As a man grows older –

Ettore Schmitz attended a private elementary school for boys directed by Sabbato Raffaele Melli, who was the Vice- Rabbi of Trieste. The school was located in the same building where Melli lived, in via della Legna (now via Gallina) leading from piazza San Giovanni to piazza Goldoni which was originally called “piazza della Legna” or “Firewood Square” because it was home to the market where firewood from Istria was sold.
At the age of 11 he attended the private Jewish school of Emanuele Edeles and from 1874 to 1878 the Brussel’sche Institut of Segnitz in Bavaria.

Between 1878 and 1880 Svevo attended the Revoltella Vocational School for Trade, a professional school founded by Baron Pasquale Revoltella, where Ettore would also teach later in life. The school would develop into the Department of Economics and Commerce of the University of Trieste. 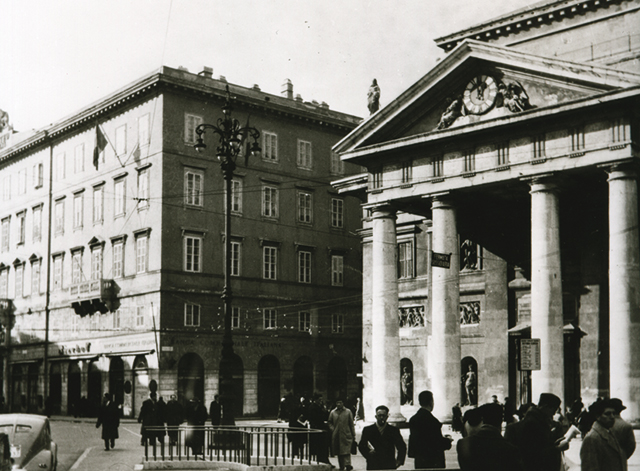 On 27 September 1880 Svevo’s family went through serious financial difficulties that forced him to leave his studies and to take up work at the Trieste branch of the Union Bank of Vienna as a foreign correspondence clerk. It was in those years that Svevo wrote A Life, his first novel, where the protagonist, Alfonso Nitti, is a bank clerk.

He left the bank in 1898, after his wedding, to join the Veneziani family business. This gallery is very close to the Stock Exchange and it was a local meeting place for businessmen. It is here at Tergesteo that the main character of Zeno’s Conscience meets Giovanni Malfenti, who would become his father-in-law.

Olivi had advised my going to the Tergesteo, for he said it would be a good preparation for commercial life for me to frequent the Bourse.
– Zeno’s Conscience – 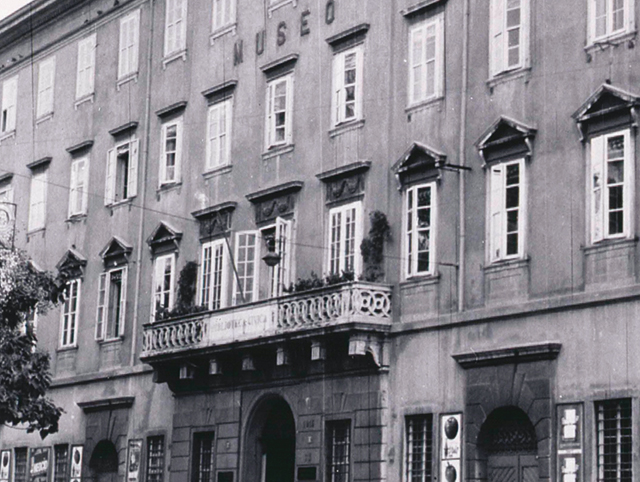 The palace, built between the late 18th and the early 19th century, was owned by Biserini in 1804, but the property was transferred to the Town that in 1817 turned it into the seat of the Imperial Royal Academy of Commerce and Nautical Science. It was restored by Pietro Nobile. It has been home to the Town Library since 1820.

In 1873 Attilio Hor tis, a scholar and a politician, was appointed Director of the library that in 1950 would take his name like the square in front. Ettore Schmitz and Alfonso Nitti used to come to the library after work. Then he discovered the city library, and all those centuries of culture at his free disposal there meant a saving on his meager budget. He tied himself down to the library at fixed hours, which gave his studies the regularity he needed.

He made very few acquaintances in the library. He would enter the long reading room filled with tables in parallel lines, take any seat, and sit there for some time with his head in his hands, so absorbed In reading that he did not even see the people sitting beside him.
– A life –. 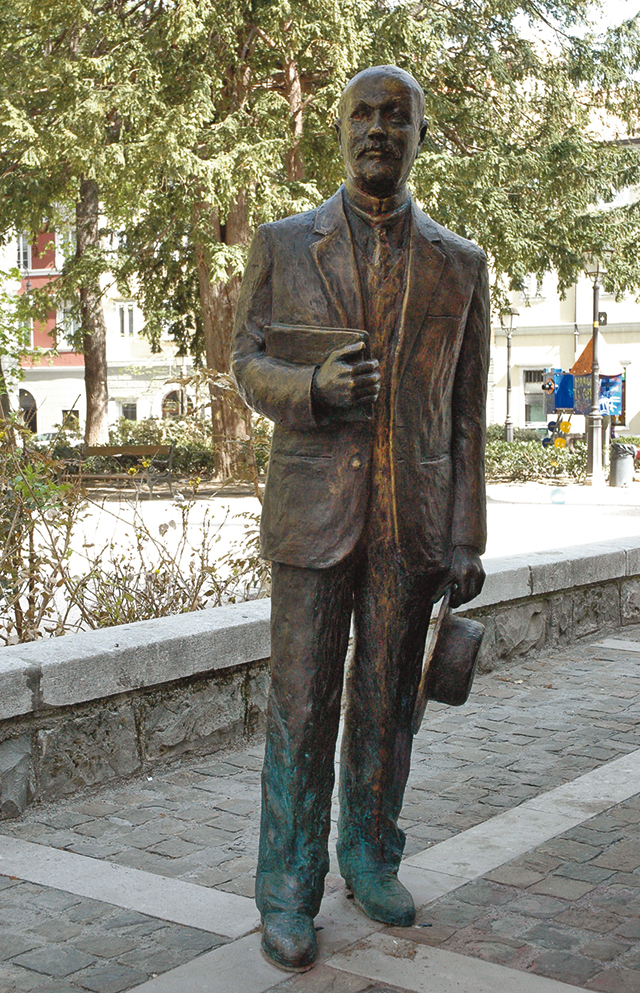 The bronze statue by the sculptor Nino Spagnoli was positioned in the square in 2004. It is a portrait of the writer walking to the Town Library.

7. HOUSE OF SVEVO IN HIS YOUTH 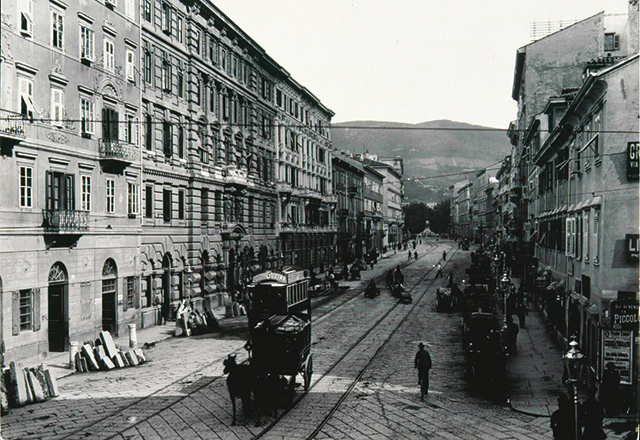 When Ettore worked at the Union Bank, the Schmitz family is attested to have lived in Corsia Stadion, where they had transferred from via dell’Acquedotto to which it ran parallel.

By good luck I found a lighted entrance still open in the Corsia Stadion and took shelter there just in time. Immediately afterwards the deluge came. The downpour of rain was lashed by a furious wind which seemed to bring the thunder along with it until it was almost above one’s head. I shuddered to think how compromising it would be for me to be found struck dead by lightning at that hour in the Corsa Stadion. Fortunately my wife knew that I was a man of strange tastes who might even take it into his head to walk as far as that at night, so probably an excuse would be found. 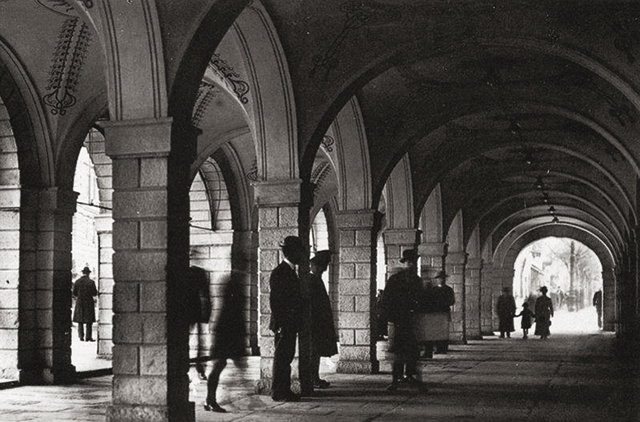 The Chiozza porticoes take their name from the architect who signed the project. In Svevo’s time there were two arcades, but only one remained after the building was restored. Svevo would come here to sit at the café by the same name, a popular meeting place for ar tists and intellectuals, and to meet his friend the painter Umber to Veruda, who inspired the character of Stefano Balli in Senilità (As a man grows older). Veruda, together with fellow painters
Carlo Wostry and Isidoro Grünhut, worked in a studio right next door, at number 20 of via Carducci. The three artists, who shared a passion for German impressionism, were the protagonists of one of the finest seasons for painting in Trieste at the end of 19th century and they were also ardent supporters of the Trieste Art Circle starting in 1884.

One evening he had arranged to meet Angiolina punctually at eight o’clock; but half an hour before the appointed time he had a message from Balli to say that he would be waiting for him in Via Chiozza just at that time, and had something very important to tell him.. 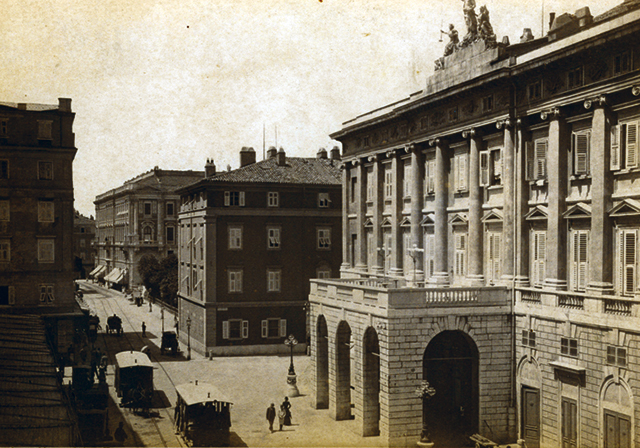 Svevo and his wife Livia Veneziani were avid theater-goers and they frequently attended the opera. Svevo was more interested in prose, but those performances were mostly organised at other theaters, like Teatro Filodrammatico and Politeama Rossetti.

He did not succeed in finding Balli that evening. Quite late Sorniani stopped him, on his way back from the theatre. After the usual greeting he suddenly said that he had seen Angiolina and her mother at the theatre, in the upper circle. She was looking lovely, he said, with a belt made of yellow silk, and a little hat of which you could only see two or three large roses against her golden hair.
– As a man grows older –

In the 19th century the hills of Romagna and Scorcola marked the outer boundary of the town and wealthy families had built their mansions amidst the greenery of the hills. Caffé Fabris was a popular meeting place and it was located at the corner between via di Romagna and via Fabio Severo. The vast spaces of the café were home to intellectuals and businessmen who played billiards, wrote in silence, or read the newspapers and magazines that rested
on the tables. Svevo himself was a regular, as he noted in Senilità.

Angiolina would probably be returning home alone the Via Romagna […] he thought he saw Angiolina passing the Caffé Fabris accompanied by Giulia and a man who must be the umbrella-maker.
– As a man grows older –

In 1907 Svevo’s family paint business opened a branch in London, but Svevo needed to improve his English. At the time a young Irishman called James Joyce taught at the Berlitz School and three times a week he would come to the Veneziani mansion to teach English to Svevo, at times with his wife Livia and their daughter Letizia in attendance.

The two struck up a friendship based on mutual respect and it was thanks to Joyce, who moved to Paris at the end of World War I, that Zeno’s Conscience rose to the attention of French and Italian critics.

Corner of via Battisti and via Giulia 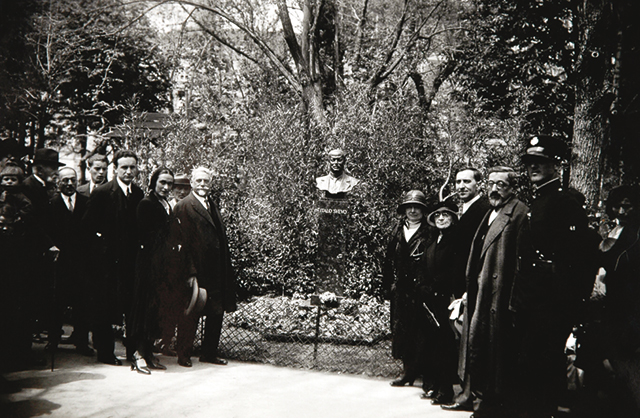 The bronze bust of Italo Svevo by the sculptor Giovanni Mayer was unveiled in the public garden in a ceremony attended by his family and local authorities on 26 April 1931.
On 8 September 1939 the bust was knocked down and defaced and the following morning the news appeared in the fascist papers. Milan’s “Il Popolo d’Italia” dated 27 April announced «A useless bust is gone» and Rome’s “La Tribuna” wrote: «Last night the bronze bust of Italo Svevo was removed from its pedestal. Being Jew was the writer’s only claim to fame». The busts of famous artists and other local figures that are found in the garden also include Livia Veneziani and James Joyce.

I had hardly got outside the Giardino Pubblico before I found myself face to face with my mother-in-law. A curious suspicion arose in my mind. What was she doing there so early in the morning, such a long way from our part of the town? Could it be that she was being unfaithful to her sick husband?
– Zeno’s Conscience –